The great theologian and dream worker Carl Jung called religion a "submission to the irrational facts of existence."

Nothing is more deliciously or gloriously irrational than the resurrection of Jesus from the dead. The Romans thought they were rid of him, his disciples feared all was lost, and then, all of a sudden, everyone was proved wrong by what is perhaps the most right event in the history of the world.

But if I remain trapped in my small self, in the assumptions of this world I'll never know the infinite ocean that is reality.

I cannot explain the resurrection, but I can tell you how to begin finding it for yourself. Mary Magdalene went to the tomb of Jesus expecting to find a body. Instead she met two angels, dressed in white. They asked her, "Woman, why are you weeping?" She said to them, "They have taken away my Lord and I do not know where they have laid him." When she had said this, she turned around and saw Jesus standing there, but she did not know that it was Jesus. Jesus said to her, "Woman, why are you weeping? Whom are you looking for?" Supposing him to be the gardner, she said to him, "Sir, if you have carried him away, tell me where you have laid him, and I will take him away." Jesus said to her, "Mary!"

When she hears her name, she knows. Why I cannot explain resurrection is because it happens to each one of us differently. New life calls us by name. It is not generic, nor a recurring pattern, it is a unique experience, just as each one of us is unique.

Resurrection is the Christian word for Enlightenment. 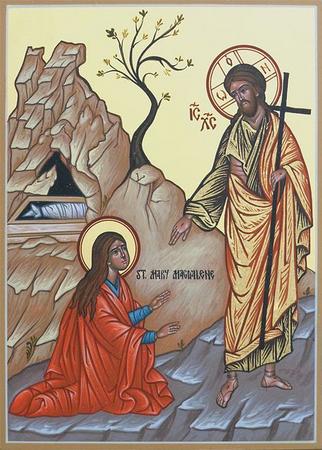 JOIN US ON ZOOM FOR SUNDAY WORSHIP!

EMAIL US AT STAIDANSBOLINAS@GMAIL.COM AND WE WILL SEND LOGIN INFORMATION.